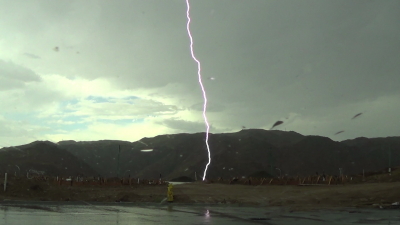 SevereStreaming by SevereStudios has been in operation since 2006, making it the longest-running storm chase video streaming service in existence.

Originally built by a group of storm chasers, media specialists, and IT professionals who simply wanted to bring their Live ChaseCam feed to a larger audience, the original SevereStreaming system was opened to the general storm chasing community in 2007.

The first platform was built on Windows Media technology and allowed for high quality at very low bandwidth, a requirement back in the "early days" of pre-LTE mobile cellular data. We have always supported the National Weather Service with our efforts.

Ever since our launch, a team of developers has continued to refine and overhaul our streaming technology to add features, compatibility, and reliability. We make it easy and fun for chasers and spotters to show the world what they are seeing in the field through the lens of their camera.

In 2014, we retired the original streaming platform and upgraded to HD-capable RTMP streaming. It is based around the H.264 video codec, and is optimized for Apple HLS and Android, without needing special apps and software. This means nearly all of the mobile computing devices in the world are able to display streams from our system.

Also in 2014, we teamed up with ZoomRadar to combine their robust mapping system with our storm chaser video layer. Together with ZoomRadar, the Live ChaseCams are seen on hundreds of radio, TV, and newspaper websites around the country.

In 2016, our streams were added to the very popular MyRadar mobile app.

Not Just A Server In Somebody's Basement

SevereStreaming is built on a scaling, redundant streaming architecture that automatically detects high traffic and launches additional servers to handle the demand. We utilize advanced cloud computing services, a mature streaming engine, and a premier Content Delivery Network (CDN). SevereStreaming has developed our own proprietary monitoring system and APIs.

During high-traffic events and busy severe weather days, we have a dedicated team of streaming experts that oversee the stability and quality of the system and make adjustments to keep the video flowing. We have served over 30,000 streams at the same time and over 20 Gbps of video throughput.

Not A Huge Corporation, Either

SevereStreaming, by SevereStudios, is owned and operated by Kory Hartman, a radio and TV professional who has worked in the broadcasting field for over 30 years.

This streaming platform is our contribution to the chase community and warning process. Our streams are viewed by National Weather Service offices from coast to coast to make warning decisions every year. We are proud to have been the first mass-audience streaming platform and introduce live storm chase streams to the world.

Our platform is funded mostly by the streamers who pay for upgraded services and support, and a little by advertising revenue. We are not a big corporation looking for massive profits, nor do we fund our chase operations with proceeds from the streaming system. In fact, we only see very small profits on what it costs to run the servers and pay for bandwidth.